COLLWEB is a global network of collectors that builds a community of people who appreciate the value of art, cars, watches and real estate.

Stefano Puleo was born in the province of Catania Acitrezza on 29th May, 1950

His first approach to painting dates back to adolescence, when he saw up
close the works of great masters like Guttuso, Migneco, Barbaro,
Mirabella and many others who participated in the Acitrezza Award during
the early sixties.

In 1964, he enrolled at the Art School of Catania. The year 1966 dates
his artistic debut in expositions and participation in competitions. At
that time, his production mainly included  drawings and small
sculptures.

He held his first solo exhibition in 1970, at the G7 gallery in Catania,
and visited several European cities in the same year. He rested in Oslo
for a while where he saw the works of Munch, but it was the whole
historical period of expressionism that attracted his interest. He also
visited Berlin and Dresden.

In 1972, he held an exhibition of one hundred drawings at the Zelantea
Academy of Acireale and in 1974, he set up a solo exhibition of 40
drawings  and began a partnership that led him to make thirty etchings
in two years, some of which are on show at the Underground gallery in
Giarre.

In 1975, he was appointed as assistant professor of art at the Art
School of Catania. In 1976, he set up a exhibition of paintings,
drawings and sculptures in La Vite gallery of Catania as well as
exhibiting 100 drawings at the St. Luca Gallery in Verona.

In 1980, he was called by Giuseppe Fava to collaborate in the drafting
of the Journal of the South, producing political satire and grotesque
satyr drawings for the magazine. That same year, he held solo
exhibitions at La Vite Gallery in Catania and the Ghelfi Gallery in
Verona.

In 1981, he exhibited his works at the Gregorian University in Rome and
Lo Scudo Gallery in Verona, where we presented the collection, “The
Circus”, with a presentation by J. P. Jouvet of Gibralfaro editions.

A collection of etchings entitled “Tribute to Rudy de Cadaval”- taken
from his exhibitions  at La Vite Gallery in Catania - were edited in a
book with text written by Domenico Cara. He took part in the Ibla
Mediterranean Prize and was awarded the New Generation Prize.

He was present with his works at the Bidart event in Bergamo, 1987.  In
1991, the monograph “Stephen Puleo” was presented. Its material was
taken from exhibitions at La Vite Gallery in Catania, while its text was
written by Dario Micacchi. In the same year, he took part in the Fourth
Bidart in Bergamo.

In 1992, he held solo exhibitions at the following galleries: the
Faustini in Florence, the Meridiana in Verona, Gallery 10 in Maratea,
Marconi di Forte dei Marmi and the Meceden in Milazzo.

The town of Laives, near Bologna, promoted a solo exhibition which was curated by the  Faustini gallery of Florence.

His work was also present at the 1993 Bologna Art Fair and Art Expo in
Bari, while in 1994, he held solo exhibitions at Palazzo Fizzarotti in
Bari, Mediarte Art Gallery in Rome and Il Pozzo Gallery of Bellinzona.

In 1996, he presented solo exhibitions at the Marconi di Forte dei Marmi
Gallery, at the Faustini Gallery in Florence and at La Vite Gallery in
Catania.

1998, he organised solo expositions at the Ars Italica Gallery in Milan,
the former Carmelite church in Taormina and in the Church of Santacroce
at  Brisighella. He also had his travelling exhibiton entitled,
“Sicily is an archipelago”, hosted in Rome, New Jork, Palermo and
Messina.

In 2000, he had solo exhibitions at Artexpo in New York, Tesion Telekommunikation Stuttgart and Galerie 4 in Freiburg.

In 2001, he participated at Expo Arte in Bari, Art Expo in Udine and Art
Padua 2001. His monograph, “Puleo”, was launched at Milan’s Press Club.

It was published by TÉCHNE art editions and curated by Domenico Montalto.

In 2002, he was awarded the Pulchra Ecclesia Prize- a series of art for
sacred space- in Montichiari, near Brescia, as well as the Carthage
International Prize in Hammamet, Tunisia.

In 2003, he held a solo exhibition at the Norman Palace in Palermo and
another solo in 2005, at the Sangiorgio Gallery in Milan. In 2006, he
participated at: Luxury & yachts in Verona, Nonsolotarli in Rome,
Antiques in Bari and Cremona Antiques in Cremona.

In 2007, he was present at Palazzo Robellini in Acqui Terme and also at
the European Parliament Headquarters, holding two solo exhibitions.

In 2008, he organized a solo exhibition at the Artistic Cultural
Piedmont Gallery of Art in Turin and in 2009, he held another solo
called “Reality suspended” which was curated by Prof. Carlo Franza of
the Press Club of Milan and catalogued by Silvia Editrice publishers.

In 2009, he won the XXI edition of the Arts Award for Culture Prize
(Critics Award), in Milan, and on the recommendation of Professor Carlo
Franza.

In 2010, he presented a solo exhibition at Castel dell ‘Ovo, in Naples
and in the same year, became a member of the Arcane Movement.

In 2011, he received the “Gugliemo II” award and has permanent work on
display at the “Giuseppe Sciortino” Museum in Monreale, Palermo.

In the same year, he has also exhibited work at the Eden Fine Art
Gallery, New York.                   In 2012,The National Museum of Lviv
(Ukraine) acquires a work permanently. The same year exhibition in Rome
at the Teatro dei Dioscuri at the Quirinale Palace exhibition in New
York at the UN building (Human Contrasts - the masterpieces of the
italian art) and White Plains - Artwestchester. At the National Arts
Club in New York – Manhattan.  In 2013 he exhibited at the Palazzo
Granafei-Norvegna in Brindisi and the Venice Biennale (Overplay) 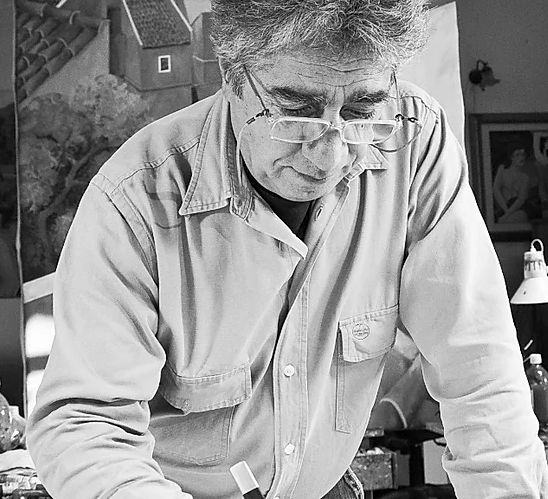 Glimpse of the lake

Glimpse of the lake

Models in the studio